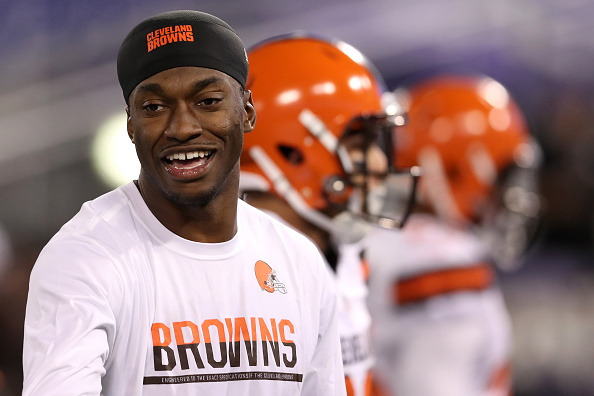 The Cleveland Browns are 0-11. Outside of just wanting to get these final five games over with, there really isn’t much reason to watch this team any more.

The litany of rookies drafted by Cleveland have yet to show much growth, if any. The Browns’ strategy of letting two of the best linemen in the NFL walk in free agency has worked just how you’d expect, as the line is now an outright disaster which could get bowled over by a stray shopping bag blowing in the breeze. It’s all wrapped up, of course, with confusion and chaos at quarterback.

Rookie Cody Kessler showed flashes early in the year, but has been regressing. His questionable arm-strength and slow decision-making have become more apparent, and it’s starting to look like he won’t be filling the everlasting void at franchise QB.

Making matters worse was his suffering another concussion this past Sunday in an embarrassing loss to the Pittsburgh Steelers. Cleveland now goes back to 37-year-old Josh McCown as its starter this weekend against the New York Giants, which is then followed by a merciful bye.

How the Browns are able to muster enough motivation to come back from their week off and finish the rest of this death march is one thing. Who will actually be starting at quarterback by then is another.

I never thought I’d say this, but I hope it’s Robert Griffin III.

When it was announced last week Griffin was almost ready to return, most fans wanted nothing to do with such a thing. It certainly made sense, considering Kessler needed a longer look and Griffin’s trademark durability issues struck just three and a half quarters into his first season in Cleveland. Why bother putting him back on the field?

Now? At this point, the Browns might as well just hand the reins back to Griffin when he’s healthy.

For one, knocking on his injury issues ignores the fact he did make major strides in building himself back up after a messy end to his tenure in Washington. While he still seemed like he had a ways to go before looking like the 2012 Rookie of the Year, Griffin developed some preseason rapport with wideouts Terrelle Pryor and Corey Coleman. His ability to throw deep balls and improvise on the run could also add some life to a Browns offense which has become as thrilling as day-old bread.

As mentioned last week, it’s also difficult to believe coach Hue Jackson has already moved on from the man he spent days vetting and working out before signing him last winter. Cleveland’s coach has made Griffin his priority project, so I doubt he’d turn down an additional opportunity to prove his work was worth it.

Another obvious argument for giving the job back to Griffin is pretty simple – what’s the point in sticking with McCown? What purpose does starting him for the rest of the year serve?

The journeyman has had one decent quarter this year, and has followed it up with a bag full of injuries and brutal turnovers. McCown is nobody’s idea of a franchise quarterback, so putting him on the field longer than you have to is just a waste of time.

Finally, the Browns cannot play Kessler again this year. Even if he recovers from his latest concussion, he’s already suffered two this season. Putting him back behind the group of scarecrows pretending to be Cleveland’s offensive line is a genuine health risk and could be career-threatening.

Do I think Griffin could potentially be a long-term option for Cleveland? No. Do I think he’d even stay healthy for the rest of the season? That feels like a reach, too. Still, at this point the Browns should at least see what they have in the guy they invested so much time in during the offseason.

Of course, we can be honest and realize the most likely outcome in this entire scenario. McCown will start Sunday, but is likely to get hurt yet again thanks to his being protected by Joe Thomas and four tackling dummies pretending to be linemen. The Browns will spend their bye week forced to decide between starting Griffin or rookie Kevin Hogan, who has a throwing motion which would make Tim Tebow proud.

Basically, the decision to go back to RG3 will probably make itself.

Regardless of whether or not this actually happens, it just makes the most sense for Cleveland to go back to where it began and start Griffin when he’s ready. There’s nothing else the team is playing for, so it might as well keep checking to see if it has anything resembling a franchise quarterback on its current roster.