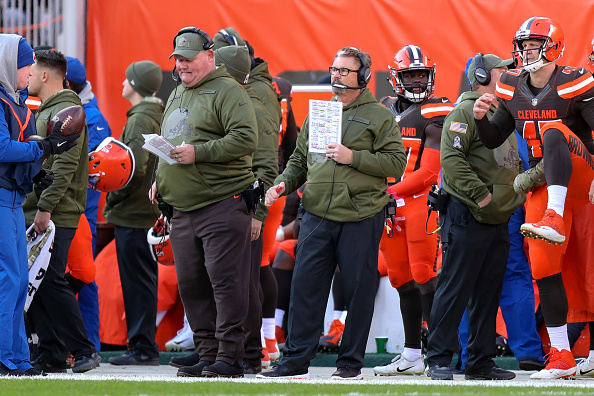 What a difference a few weeks make.

On October 29, when the Cleveland Browns mercifully fired coach Hue Jackson, fans begin debating who they felt was the best replacement the team could hire. Today, many within Cleveland’s fan-base feel said debate is already over.

The answer, they feel, is clear – the Browns need to keep their current staff intact. The team has won three of five under interim coach Gregg Williams, while offensive coordinator Freddie Kitchens has Cleveland firing on all cylinders ever since he took over play-calling duties.

So, there you go. Why bring in a new hire if the team already looks good with the coaches it has in place?

It sounds simple. However, the reality is it’s anything but.

This isn’t to knock the work Williams and Kitchens have been doing in their time as interim coaches. The Browns have looked like a completely different team since removing Jackson and offensive coordinator Todd Haley from the picture, suddenly having legit playoff discussions with three weeks left in the season.

The hype this has created among Browns fans is unlike anything we’ve seen with this team in years, and is also driving the growing calls to keep the status quo when it comes to coaching. As they say, if it ain’t broke, don’t fix it.

Again, though, the concept of keeping the coaching staff as is isn’t a simple call for GM John Dorsey. There are many factors he must consider, factors which sure seem to indicate bringing in a new coach is still the best route to take.

For one, you have to admit the calls for keeping Williams are very prisoner of the moment. When Browns fans watch their team go from looking drunk at the wheel under Jackson’s watch to playing extremely competitive football for Williams, it’s only natural to deem him as the clear choice as the full-time coach.

While this is understandable, it’s also not how Dorsey should make easily his most important decision as Browns GM.

His selection of Cleveland’s next coach will be one of his defining moments with the team. While everyone is singing his praises now, a bad hire can quickly derail all the goodwill he created. As a result, he needs to base this call on more than just a gut reaction.

Unless he feels 100% confident Williams is the right man for the job, keeping him on as head coach would indeed be a gut reaction.

Another aspect Dorsey is going to have to consider when making his coaching decision is something we’re not quite used to when it comes to Cleveland coaching openings – people are going to want this job.

Frankly, not only is this a first, it’s also one of the biggest reasons against keeping the staff as is.

Cleveland is recognized as a team on the rise, finally having a franchise quarterback in place to go along with young stars at edge rusher, running back and in the secondary. The team has plenty of cap space to work with, and another treasure trove of picks in the coming draft.

As a result, the Browns will have one of the most popular openings of the offseason.

Knowing this, you could technically look at keeping Williams as settling. Sure, this may come off as a dig against him when considering how well the team has been playing under his watch. However, it doesn’t make the statement any less true.

When framed this way, it makes the idea of keeping Williams a little less appealing. The Browns are finally able to attract the best available candidates, and would be passing on all of them out of fear of rocking the boat.

I understand how impressive Williams turning this team around really is. I’m aware of how well the Browns are playing under his watch. I’m not looking at this and saying, “who cares, the team is better off without him.”

However, in order to be sold on the idea of keeping Williams as head coach, Dorsey has to confidently know he’s the best candidate for the job.

It’s easy to look at the recent performance and say “yes.” As mentioned above, though, there’s for more to it than just that.